Configuring an xyz instance can sometimes be annoying. Many nodes want to have the same configurations, same middlewares etc., but is it good to copy and paste a chunk of code in all of these microservices? I mean, think about it, Aside from .register which creates new endpoints for functions, and is dependent to the business logic, there is a good chance that most of the lines of the microservices that you are writing are the same among all of the microservices in that application/project. One of the ways to encapsulate these common steps in an isolated environment so that they can be reused as a Bootstrap function.

Bootstrap functions are… nothing in fact. They’re just functions that take in the current xyz instance as argument and are free to make any modifications to it. This can include exposing new functions, listening to events, registering new middlewares etc.

A complete example of this is the Monitor Bootstrap function. What this bootstrap function basically does is that it inserts two middlewares in the transport layer, which count the number of messages sent and received. Finally it will launch an express HTTP server to serve this information, alongside some additional data about the system, to a specific end point.

Let’s see the big picture before going any further! 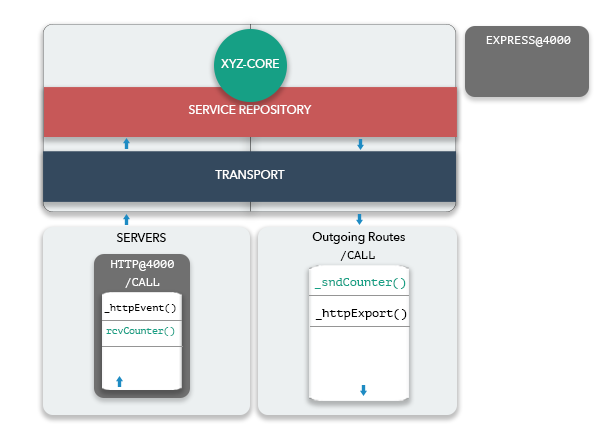 As you see, the monitor bootstrap will automatically insert two new middlewares, indicated by green color in the image. These middlewares will measure the message rate at transport level and will report them to a new component, independent of xyz-core, an express server.

Keeping these information in mind, now we can see the code:

As you see, inside the bootstrap function, we manipulate a xyz parameter which is supposed to be passed into this function when it is being invoked. This parameter can be treated exactly as if it were an instance of the XYZ class. To simplify this even more:

Inside your normal code

inside a bootstrap function:

It can also be seen that this simple monitor example will insert these middlewares to the default CALL route, located on the primary server and port of the node by default. This bootstrap function can be configured to work with multiple servers and outgoing routes, but that is not the our primary concern right now. You can see the repository of this bootstrap function for more information.

Assuming that we have this bootstrap function, you could use it with:

This would work, but we highly recommend you to use this method:

This allows an xyz instance to keep track of its bootstrap functions and ensure their compatibility, if required. Aside form that, it can output its list of bootstrap functions in logs. You have already this when you use console.log on an instance of xyz. Take another look if you haven’t seen the bootstrap section printed!

So, given that this bootstrap function is written once, you can always use it inside any of your microservices with just one (or two, including the require statement) line of code:

After you set up this bootstrap function, you can view a nice monitoring page at your localhost (and on port 7000 in this case): 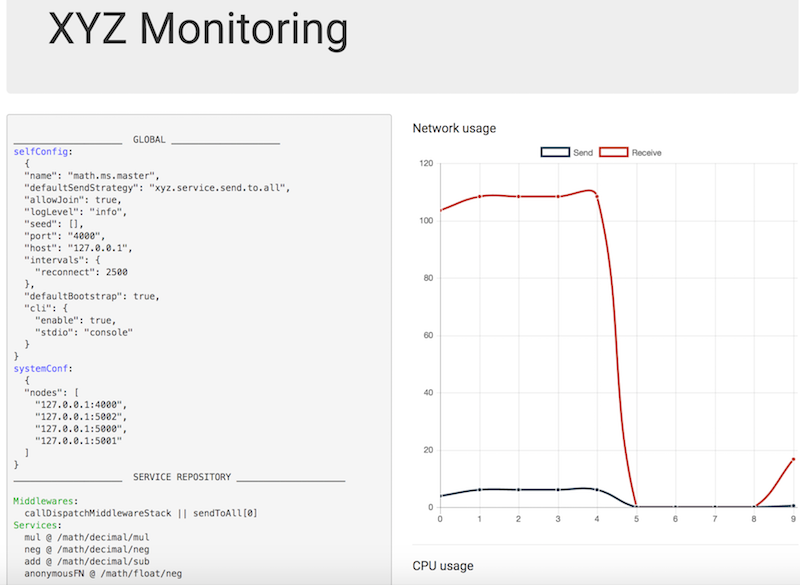 This bootstrap function is available on both npm and github. You can install and use it using: